Seeing Providence Chinatown is an in-progress project using archival photography and maps to build an immersive digital 3D model of historic downtown Providence Chinatown, building on the work of the RI Chinese History project by Angela Yuanyuan Feng, Julieanne Fontana, John Eng-Wong and others. The process of reconstructing the neighborhood’s building exteriors and streets will weave together and interlink the relatively few images remaining of this once-vibrant enclave, of which almost no trace remains today. 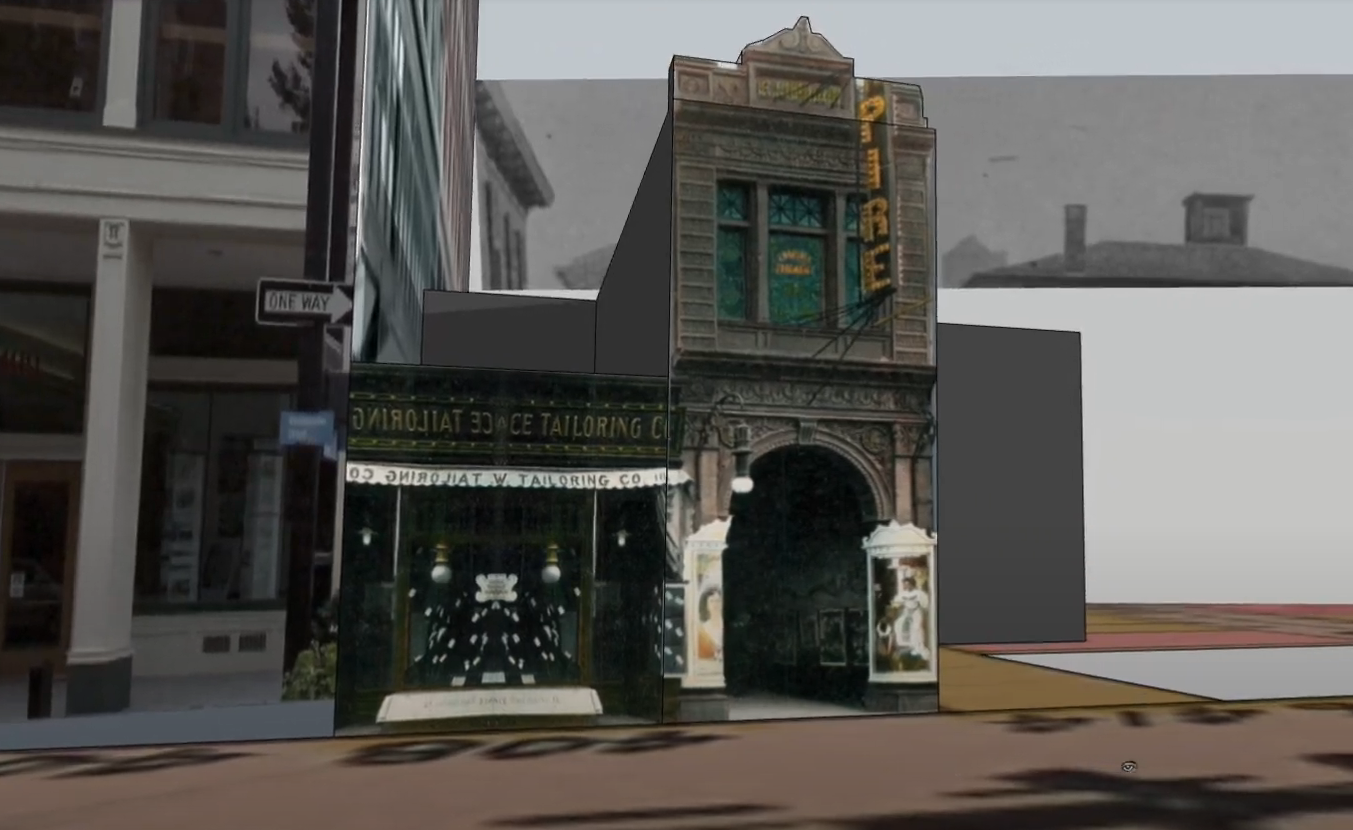 The model will bring to life historical records of this forgotten neighborhood, enabling people to “overlay” the model onto today’s streetscape using AR/VR, and to gather within the reconstruction in an online environment. This will serve as a space for collective creative practice for local Asian-American communities – not only as a venue for exhibitions, events, and as a permanent virtual home for scholarship on Providence’s Chinatown and local Asian-American history, but also as a vehicle for the re-interpretation and reclaiming of the archive as a space for lived practice and ancestral knowledge, rather than a museum exhibit of a vanished society – a relational reconstruction.

Archival media offers a selective and partial view into the lives of marginalized communities, and those few accounts which exist of nonwhite communities are often distorted by contemporary racist views. My hope is to use the process of virtual reconstruction to enable the public to see and experience this unique neighborhood as a vibrant and vital part of our history, and to enable a re-connection with a space that was erased from a very familiar part of today’s Providence.

The colonial histories of anthropology and archaeology are a sensitive aspect of any work to reconstruct or “make visible” communities which have been the subjects of extractive and dehumanizing research. This proposal focuses on opportunities for present day communities of color to find a personal connection with archival materials, and bringing these histories to life, not as a curiosity, but as a setting that might have been familiar to our grandparents – building on the work of authors such as Octavia Butler and Linda Sue Park, as well as the concept of re-existencia described by Albán Achinte and Madina Tlostanova: “an active reworking of odors, tastes, colors and sounds of his/her ancestors and remaking of systematically negated forms of interactions with the world, of being and perception… a sensual response of resistance… in defiance to coloniality.” (I learned about re-existencia through Aisha Jandosova and Aida Issakhankyzy) 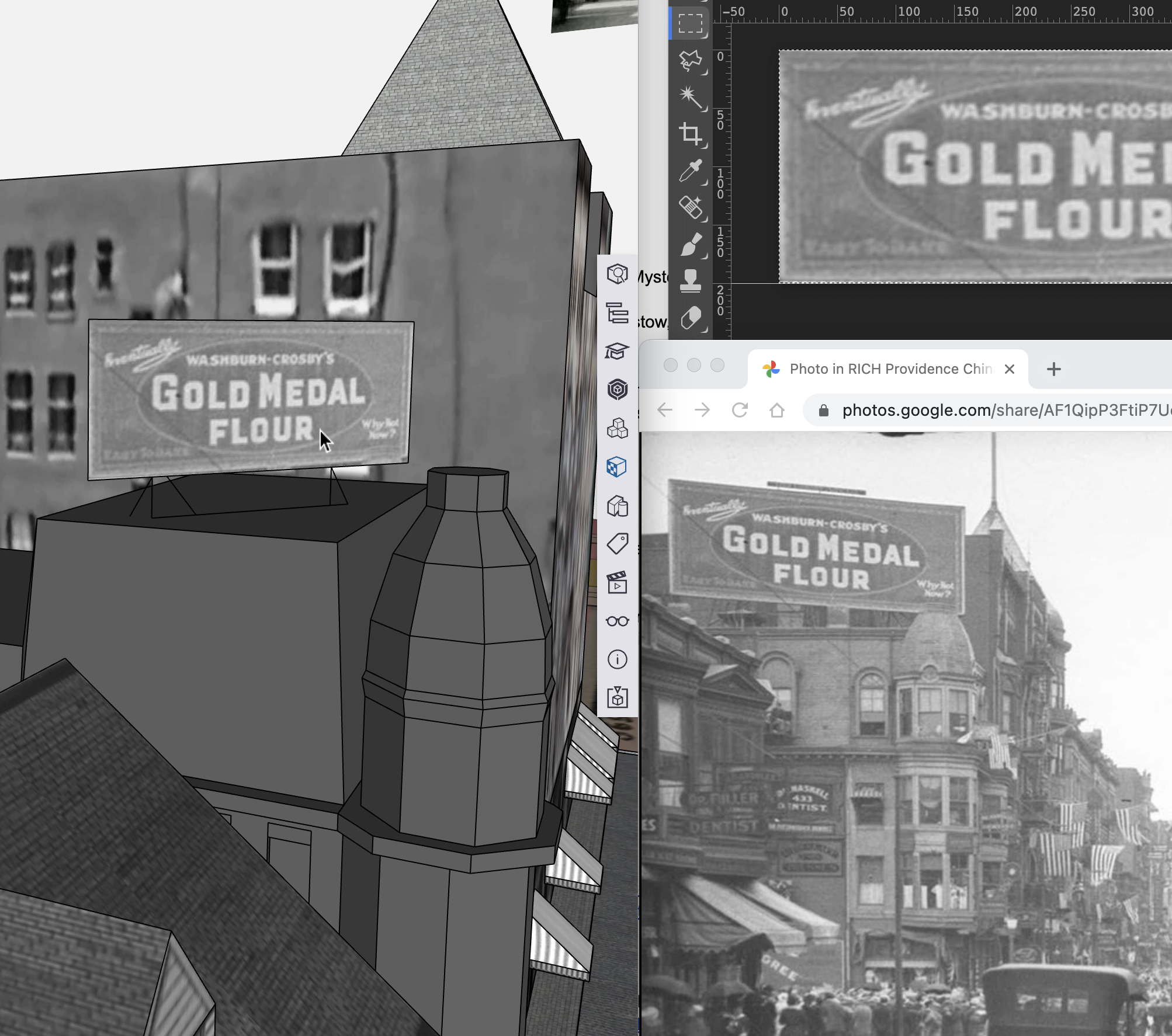 I hope to produce a more immersive and contextually complete record by way of a spatial and sensory reconstruction, which will enable audiences to experience in a richer and more personal way what it would have felt like to stand in the heart of Providence’s Chinatown. Our histories include traumas – my ancestors were not allowed into the US until 1965, and the early history of Asian Americans in Providence was also fraught with exoticization – like Chinese performer Afong Moy’s 1835 appearance as a curiosity in the Providence Museum. These histories are over-represented in the archive.

By contrast, my goal is to use the process of reconstruction as one of healing and of belonging, and as a reclaiming and re-contextualizing of the archive and its meanings for our futures, inspired by the speculative futurity projects of contemporary Black artists and the idea of critical fabulation developed by Saidiya Hartman. My practice engages peoples’ creative and collaborative abilities, building tools and spaces which support and inspire creative practices, and the Relational Reconstruction Toolkit focuses on the creative possibilities of what it could have felt like –as an Asian American person – to walk down the street and experience a sense of belonging at that moment in history.

Relational reconstruction focuses on the potential for a more multifaceted remembrance and correction, through relationships between the experiences partially represented in the archive, and today’s parallel experiences in minoritized groups. It acknowledges the limitations of the archive as a means of accessing erased moments, experiences, and spaces. In this approach, I seek to correct erasure, but through an imaginative, immersive, social, and creative approach, which encloses a gentle and nourishing space rather than enclosing an artifact of history in a diorama at a museum or on a plaque. This process restructures the archive as a set of selective clues, shaped by the active intent to obscure ancestral knowledges best expressed in ways least likely to be historically preserved – emotional tone, color, sound and smell, private moments and ephemera of personal relationships, hopes, aspirations, things unsaid.

This work is supported by the Providence Department of Art, Culture, and Tourism, the RI Council for the Humanities, Movement Education Outdoors, and AS220. 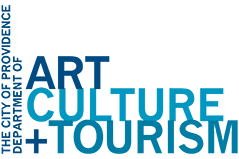 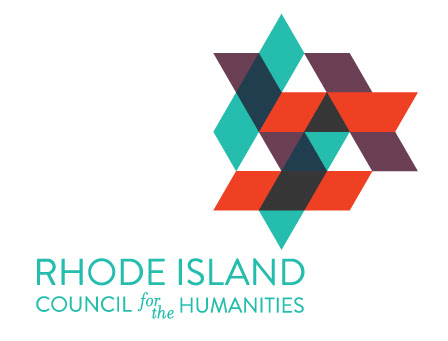